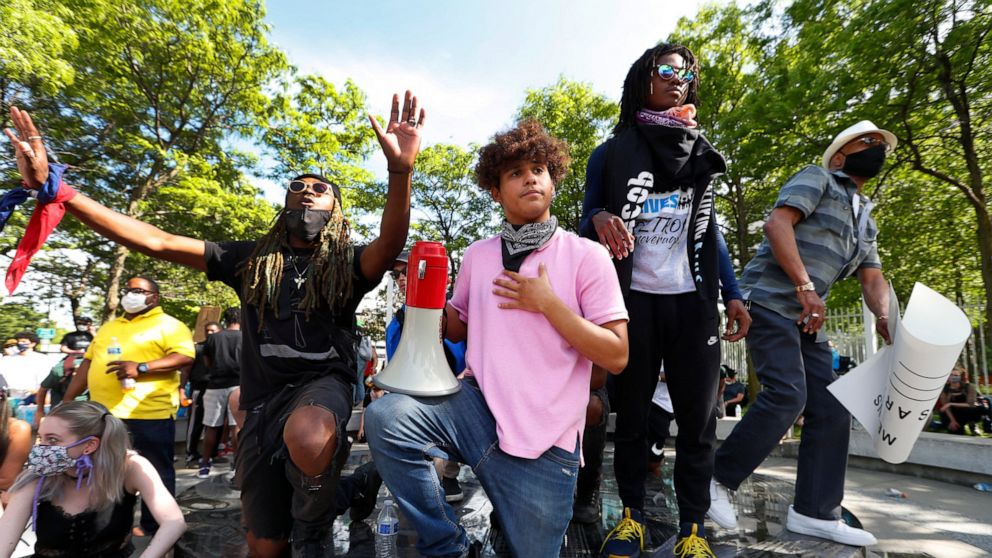 Before George Floyd stopped pleading for air beneath a police officer’s knee, 19-year-old Weidmayer Pierre was planning to work at Wal-Mart during his summer break from Palm Beach State College.

Now his days look completely different. Pierre has quit his retail job to focus on organizing Black Lives Matter protests every few days in Florida, determined to channel the groundswell of energy around the world into meaningful reform in his hometown.

“Every time someone gets killed by police brutality we protest once or twice and it’s done,” said Pierre, who wants to help police improve the system from within. “This time, I’m not planning on stopping until we have a change.”

Pierre is part of a grassroots, decentralized wave of young organizers across the U.S. helping drive the outpouring of protest against racism and police brutality in cities and towns around the nation.

Many are new to organizing, but have seen a drumbeat of deaths of police-brutality cases captured on video since they were children. Social media is second nature for many, and they’re showing how small groups can translate online information quickly into real-life action.

Now, in big cities and small towns, both liberal and conservative, they are taking matters into their own hands and bringing together hundreds of thousands of people to press for change.

The novice organizers’ visions for the future differ, but they all hope their voices are helping create a historic turning point in dismantling racism and inequity.

Tiffany Medrano Martinez had just graduated from eighth grade when she decided to organize a peaceful demonstration in her hometown of Redwood City, California. The 14-year-old had watched protests sweep the country in the wake of Floyd’s death, some accompanied by unrest in the form of smashed windows, stolen goods and burned buildings.

She said she understands the roots of anger but wanted the keep the focus on reforms. So she put together an online flier setting the event for June 2, and wrote “don’t take anger out on small businesses.”

Within an hour, someone had altered the flier so it said the opposite. As word spread online, local leaders got worried. So she and her friends called the mayor and the police department to reassure them they didn’t want any property damage.

The event came together as she had intended, with nearly 3,000 demonstrators gathered in the center of town. The sea of peaceful protesters brought her to tears.

“When I voice out my opinions it usually doesn’t get heard. It was crazy that people were actually hearing it for once,” she said. “As youth, we have a much bigger voice than we expect we have.”

She wants more police training and more testing of officer candidates to weed out those who might become violent. And like many others, she also wants more taxpayer money spent on social programs instead of police militaristic gear — an effort often called defunding the police.

Halfway across the country in Detroit, 16-year-old Stefan Perez said his only real public speaking experience was on his school’s debate team before early June, when he was handed a megaphone and asked to help lead a protest at the city’s police headquarters.

That night, he also stepped into the no man’s land between the lines of protesters and police, putting his hands behind his back in a silent appeal for calm.

“At the end of the day, I wanted people to get home safe,” he said. “The people who are with me and watching are the voice of Detroit.”

Protesters have skewed younger demographically, with a median age of 30 or younger, at several major demonstrations since Floyd’s death, said Dana R. Fisher, a professor of sociology at the University of Maryland and author of the book “American Resistance.”

Many older adults are staying home due to their increased risk of the coronavirus and the pandemic has left younger people with more free time by forcing the cancellation of everything from internships to beach plans.

“These are young people who have been trapped inside, which is increasing anxiety, increasing social isolation,” Fisher said. “This call for solidarity has rung really true for them.”

Most of the protesters she has surveyed report hearing about the rallies from decentralized sources, like their family, friends or the social-media platform Instagram, which is popular among younger people.

In Oakland, California, a flier posted on Instagram by two 19-year-olds for a George Floyd Solidarity March drew 15,000 people.

One of them, Xavier Brown, said he was determined to transform the social media attention into real-life action. “I was very tired of seeing every single police brutality case get turned into a hashtag.”

In the tiny town of Wimberley, Texas, two high school friends spent a day creating and posting fliers on Facebook and Instagram for a Black Lives Matter demonstration that brought 100 people to the town square.

“I was kind of worried about any kind of backlash, because we are still going to be in this town,” said co-organizer Jasmine Racine Belleau, 17. “But in the end, we felt like it was really important.”

Belleau, who is Black, and her Hispanic co-organizing friend Isabella Perez, 16, said they have heard racist comments from kids they grew up with — including “we hate Mexicans” and “go back to the cotton fields.”

The comments began around the time of President Donald Trump’s election and Perez and Belleau thought their classmates were emboldened by Trump, who has referred to immigrants as “animals” and “criminals.”

The Wimberley protest also drew a few young detractors, who laughed at them and posted videos online.

But Perez said realizing she and Belleau could draw many more like-minded people to protest in public within a matter of hours was empowering and satisfying.

“There’s a lot of loving people in our community who will stand by us,” she said.

While many of the newly minted organizers around the country are first-time protesters, others have been leading similar efforts for years. Eva Maria Lewis, 21, is an activist in Chicago who has been speaking out since she was 16.

Now, she runs a network of people helping deliver groceries and household goods to people living in neighborhoods on the south and west sides of Chicago, where access has become more difficult during the protests and corresponding police presence amid the coronavirus pandemic.

“It’s also an all hands on deck moment. I have never in my life seen or heard of something like this,” she said.

Lewis has a sweeping vision of the future, one where everyone has access to food, healthcare and quality education.

Spreading rock dust on the ground could pull carbon from the...