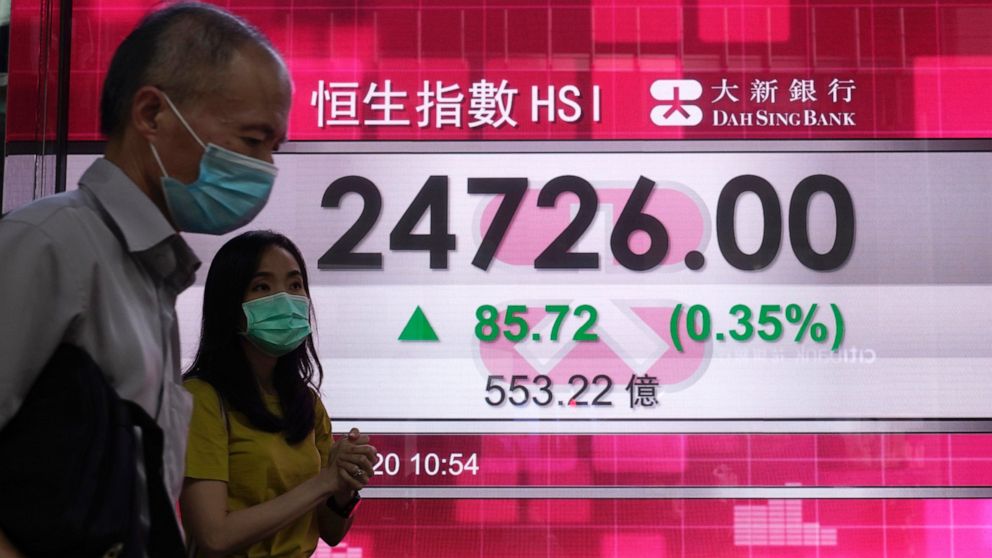 The S&P 500 was 0.9% higher in early trading and back within 5% of its record set on Sept. 2. It’s on pace for a second day of solid gains, on the heels of its worst week since June after the superstar tech stocks driving the market abruptly lost momentum.

Stocks in Europe and much of Asia also ticked higher following encouraging economic reports. In China, retail sales were higher last month than a year earlier, the first growth since the pandemic hammered the world’s second-largest economy. In Europe’s largest economy, a reading on German confidence rose more than expected.

In the United States, a report showed that industrial production also strengthened last month. But the growth wasn’t quite as strong as economists were expecting. Other reports showed that manufacturing in the New York region is rising more than economists expected, as are import and export prices.

Treasury yields were holding relatively steady after giving up earlier gains following the release of the report on industrial production. The yield on the 10-year Treasury held at 0.67%, after sitting at 0.69% just before the report’s release. The 30-year yield ticked up to 1.42% from 1.41% late Monday.

Shorter-term rates remain pinned at lower levels on expectations that the Federal Reserve will keep its benchmark rate at nearly zero for some time to help the economy recover. The central bank is beginning its latest meeting on interest-rate policy Tuesday, and it will announce its decision on Wednesday. Economists say it could change some of the language around its existing pledge to buy bonds to support markets, but they expect no major news.

Big Tech stocks continued their recovery this week, with Apple up 2.2%, Microsoft up 1.6% and Amazon up 1.6%. Such stocks soared through much of the pandemic on expectations that their profits will boom as even more of daily life shifts online. But they suddenly lost altitude earlier this month amid worries that their prices had simply climbed too high, even after taking into account their tremendous profits.

Because these companies have grown so massive, their movements alone dictate the market’s performance more than ever. Tech stocks as a group account for nearly 28% of the S&P 500, and they’re up 1.5% this week after slumping more than 4% in each of the prior two weeks.

A flurry of buyout deals in the industry helped boost shares on Monday, including Nvidia’s agreement to buy chipmaker Arm Holdings in a deal worth up to $40 billion.

In Asia, Japan’s Nikkei 225 slipped 0.4%, but other markets were stronger. South Korea’s Kospi gained 0.6%, and Hong Kong’s Hang Seng rose 0.4%. Stocks in Shanghai added 0.5% after the Chinese report on retail sales, which the country’s statistics agency cited as a gin of “stable and continuous” economic recovery.

This San Francisco home is the highest residential point in the city, and it’s selling for $22 million — take a look inside

The New Apple Watch Measures Your Blood Oxygen. Now What?

Tech chills spill into Asia, as shares sink across region