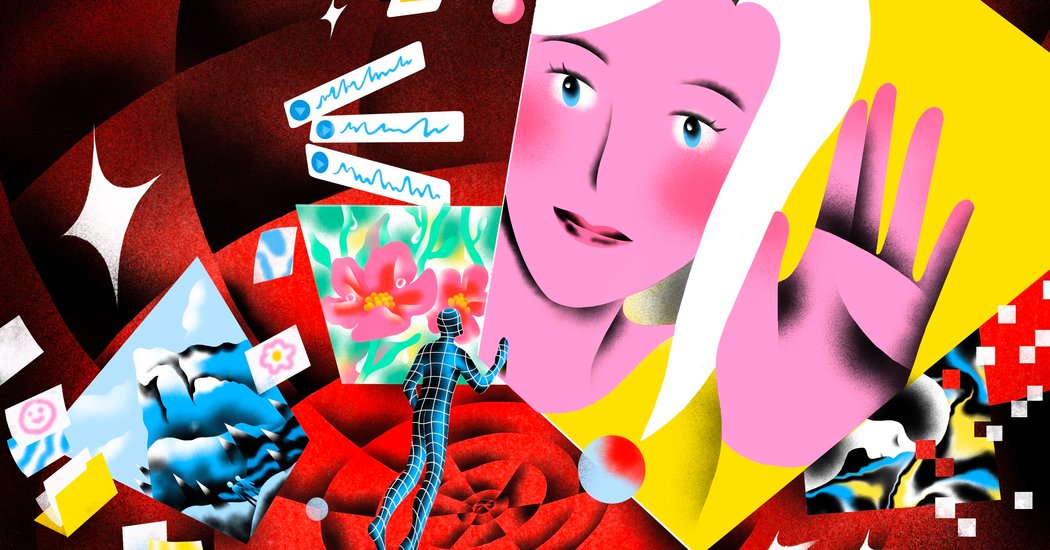 For someone who has barely left his house, I’ve had a shockingly busy few days.

First, there were the hyperactive group texts, which started up last week with dozens of messages a day from friends about the latest coronavirus news, along with photos of our overstuffed pantries. Then came the FaceTime calls from friends and relatives who were also stuck indoors and trying to stave off loneliness.

Last weekend, in between trips to the grocery store, I checked up on some friends using Twitter D.M.s, traded home-cooking recipes on Instagram, and used WhatsApp to join a blockwide support group with my neighbors. I even put on my Oculus virtual reality headset, and spent a few hours playing poker in a V.R. casino with friendly strangers.

I expected my first week of social distancing to feel, well, distant. But I’ve been more connected than ever. My inboxes are full of invitations to digital events — Zoom art classes, Skype book clubs, Periscope jam sessions. Strangers and subject-matter experts are sharing relevant and timely information about the virus on social media, and organizing ways to help struggling people and small businesses. On my feeds, trolls are few and far between, and misinformation is quickly being fact-checked.

There is no use sugarcoating the virus, which has already had devastating consequences for people all over the world, and may get much worse in the months ahead. There will be more lives lost, businesses closed and communities thrown into financial hardship. Nobody is arguing that what is coming will be fun, easy or anything remotely approaching normal for a very long time.

But if there is a silver lining in this crisis, it may be that the virus is forcing us to use the internet as it was always meant to be used — to connect with one another, share information and resources, and come up with collective solutions to urgent problems. It’s the healthy, humane version of digital culture we usually see only in schmaltzy TV commercials, where everyone is constantly using a smartphone to visit far-flung grandparents and read bedtime stories to kids.

Already, social media seems to have improved, with more reliable information than might have been expected from a global pandemic. And while the ways we’re substituting for in-person interaction aren’t perfect — over the next few months in America, there may be no phrase uttered more than “Can someone mute?” — we are seeing an explosion of creativity as people try to use technology as a bridge across physical distances.

Just look at what’s happening in Italy, where homebound adults are posting mini-manifestos on Facebook, while restless kids flock to multiplayer online games like Fortnite. Or see what’s happening in China, where would-be partyers have invented “cloud clubbing,” a new kind of virtual party in which D.J.s perform live sets on apps like TikTok and Douyin while audience members react in real time on their phones. Or observe how we’re coping in the United States, where groups are experimenting with new kinds of socially distanced gatherings: virtual yoga classes, virtual church services, virtual dinner parties.

These are the kinds of creative digital experiments we need, and they are coming at a time when we need them more than ever.

We are on the brink of what Vox’s Ezra Klein calls a “social recession” — an epidemic of loneliness and isolation brought on by the virus. The social recession will hit certain groups especially hard — older people, people with disabilities, people who live alone. But we will all feel isolated to some degree. And as long as it remains unwise to gather in physical spaces, we will need to create virtual spaces that can sustain us.

Building a virtual world to replace a broken physical one is not a new idea. It has been a staple in sci-fi narratives for decades, including classics like “Snow Crash” and “Ready Player One.” Many of these stories are dystopian in nature — in them, virtual reality is simply an escape from a real world that is falling apart.

But digital tools can also help strengthen our real-world ties if we use them the right way.

One thing we know for certain is that actively participating in online culture is far better than passively consuming it. Research shows that people who use social media actively — by sending messages, leaving comments or talking in group chats, for example — report being happier than those who simply scroll through their feeds, absorbing news stories and viral videos. Netflix binges and YouTube rabbit holes are fine for escapism, but if you’re looking to find solace on the internet, lurking alone won’t cut it — you need to contribute.

We also know that not all platforms are created equal. With so much alarming information flying around, private group messages and videoconferences are likely to produce calmer, more nourishing interactions than public platforms like Twitter and Facebook, both of which are designed to amplify content that is outrageous, divisive or otherwise highly engaging.

All over the country, citizen technologists are using digital tools to strengthen their offline communities. In San Bernardino, Calif., David Perez created a Facebook group called California Coronavirus Alerts to share localized information with his neighbors. A group of public-school teachers in Mason, Ohio, created a Google Doc to share ideas about how to keep teaching students during a state-ordered school closure. In the Bay Area, where I live, people are building databases to keep track of which seniors need help having groceries and prescriptions delivered.

It’s possible that this boom in prosocial internet behavior is temporary, and that the grifters and trolls who tend to glom onto major news events will swarm in to ruin it.

But it’s also possible that after spending years using technologies that mostly seemed to push us apart, the coronavirus crisis is showing us that the internet is still capable of pulling us together.

That’s why it’s so important that everyone — especially older people, students and people in low-income communities — has access to these tools. The digital divide is real, and in the coming months, those without internet access or devices that can run newer software will be shut out of many of the digital communities we’re building to support one another.

In addition to other economic rescue measures, it may be time for a kind of global Geek Squad, an army of tech-savvy people who can deliver free or deeply discounted devices to people who don’t have them, and teach them (from a safe distance) how to join Zoom conferences, send and receive text messages, and make FaceTime calls.

Recently, I called Jaron Lanier, the author and technologist who coined the term “virtual reality.” Mr. Lanier, who has been experimenting with building virtual communities for years, said he understood why the idea of moving our offline institutions onto the internet made some people uncomfortable.

“We saw the internet turn into this weird, dark manipulation machine,” he said. “Naturally, we worry that this could be another way to become lost or crazy.“

But he also said there was reason for cautious optimism, given the creative ways people are already finding to move their real-world support systems online.

“The obvious thing to say” about the coronavirus, Mr. Lanier said, “is that people will suffer from a sense of isolation. But there might be some good things. It could reintroduce people to their families. It might make people a little more grounded. It helps you reappreciate the wealth we have in a place like a home. It’s kind of a revelation that we have the good fortune to even be able to do this.”

Mr. Lanier is right. As the virus forces us indoors, we should be thinking of ways to invest in our digital spaces, and build robust virtual connections that can replace some of the physical proximity we’re losing, as well as mobilizing to support our real-world communities in a time of enormous need.

We can use technology to meet this crisis, rather than just distracting ourselves from it.

TELEMENTAL HEALTH REPORT: How telehealth can help US hospitals and health...

Airbnb is paying hosts $250 million after they criticized the company...