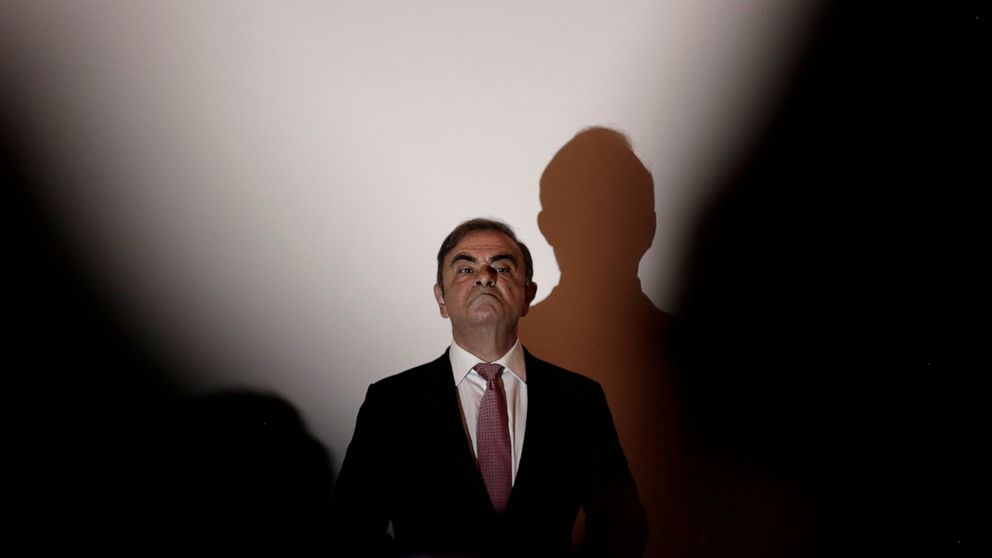 Lebanon last week received an Interpol-issued wanted notice, which is a non-binding request to law enforcement agencies worldwide that they locate and provisionally arrest a fugitive. Ghosn arrived in Lebanon on Dec. 30 after being smuggled out of Japan.

According to the official, who spoke on condition of anonymity because he was not authorized to speak to reporters, Ghosn was currently being interrogated on a separate report against him over a 2008 visit to Israel. Lebanon and Israel are technically at war.

Lebanon and Japan do not have an extradition treaty, and the Interpol notice does not require that Lebanese authorities arrest him. Lebanese authorities say Ghosn entered the country on a valid passport, casting doubt on the possibility they would hand him over to Japan.

THIS IS A MAJOR NEWS UPDATE. AP’s earlier story is below.

The lawyer for the fugitive ex-Nissan chief Carlos Ghosn appeared before Lebanese prosecutors on Thursday over a non-binding Interpol-issued request to locate and provisionally arrest his client after his brazen escape from Japan.

It was not immediately clear if Ghosn himself was at the hearing, though local media reported that he was and that he had entered through a side door, reserved for judges and lawyers, to avoid reporters.

Lebanon last week received an Interpol-issued wanted notice, which is a non-binding request to law enforcement agencies worldwide that they locate and provisionally arrest a fugitive.

Ghosn showed up in Lebanon on Dec. 30, after an audacious and improbable escape from surveillance in Japan. On Wednesday, Ghosn spoke to the media for the first time since his escape in a two-and-a-half hour-long press conference in which he railed at the Japanese justice system, accusing it of violating his basic rights.

Ghosn said he had no trust he would get a fair trial in Japan, disputing all allegations against him as “untrue and baseless.”

Tokyo prosecutors, who arrested him in late 2018, said Ghosn had “only himself to blame” for for four-month-long detention and for the strict bail conditions that followed, such as being banned from seeing his wife.

“Defendant Ghosn was deemed a high-profile risk, which is obvious from the fact that he actually fled,” they said.

Lebanon and Japan do not have an extradition treaty, and the Interpol notice does not require that Lebanese authorities arrest him. Lebanese authorities say Ghosn entered the country on a valid passport, casting doubt on the possibility they would hand him over to Japan.

Interpol cannot compel Lebanon to arrest Ghosn and it will be up to the local law enforcement authorities to decide what to do next.

Separately, Ghosn faces possible legal action over a business visit to Israel in 2008 after two Lebanese lawyers submitted a report to the Public Prosecutor’s Office saying the trip violated Lebanese law. The two neighboring countries are technically in a state of war.

At Wednesday’s conference, Ghosn apologized to the Lebanese, saying he never wished to offend anyone when he traveled to Israel as a French national after Nissan asked him to announce the launch of electric cars there.

Ghosn, who holds Lebanese, French and Brazilian citizenship, thanked the Lebanese authorities for their hospitality and defended its judicial system, which has long faced accusations of corruption and favoritism. He said he would be ready to stand trial “anywhere where I think I can have a fair trial.” He declined to say where that might be.

With big gestures and a five-part slide presentation, Ghosn brought his case to the global media in a performance that at times resembled a corporate presentation. Combative, spirited, and at times rambling, he described conditions of detention in Japan that made him feel “dead … like an animal” in a country where he asserted he had “zero chance” of a fair trial. He said he was held in solitary confinement for 130 days, was interrogated day and night for hours, appeared in handcuffs and a leash around his waist and was denied rights to see his wife for months.

These are the hottest fintech startups and companies in the world

My husband and I were always good with money until a...

Milan designers consider menswear for the next decade